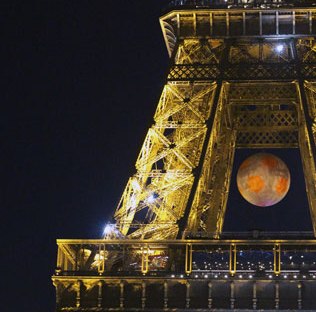 As promised I’m finally blogging about this summer’s EPIC trip…6 countries, tons of people, and 30 days is definitely once in a life time. I am going to start with the most unexpected experience of the trip…PARIS.

I know this is totally abnormal, but I’ve never really had any desire to go to Paris. I’ve had opportunity to go to France a few times, but have always chosen to go somewhere else instead…I ended up in Scotland the first time and the Netherlands the second. I think it’s partially because I until I lived in Bangkok I never liked big cities…I had never really lived in one, so I think I was just scared…and Paris is a BIG city.

When planning for this summer, Andrew and I decided that it would be much more exciting to take the train back to England at the end of our cruise instead of flying, which meant ending up in Paris…which he was excited about. We shared our plans with my mom, and she decided to join us, then my sister-in-law and niece got on board with it, and even one of my brothers.

So, after a long and exhausting cruise…plus a couple extra days at the beginning and the end enjoying new and exciting places…6 of us boarded a train in Barcelona and headed for Paris. 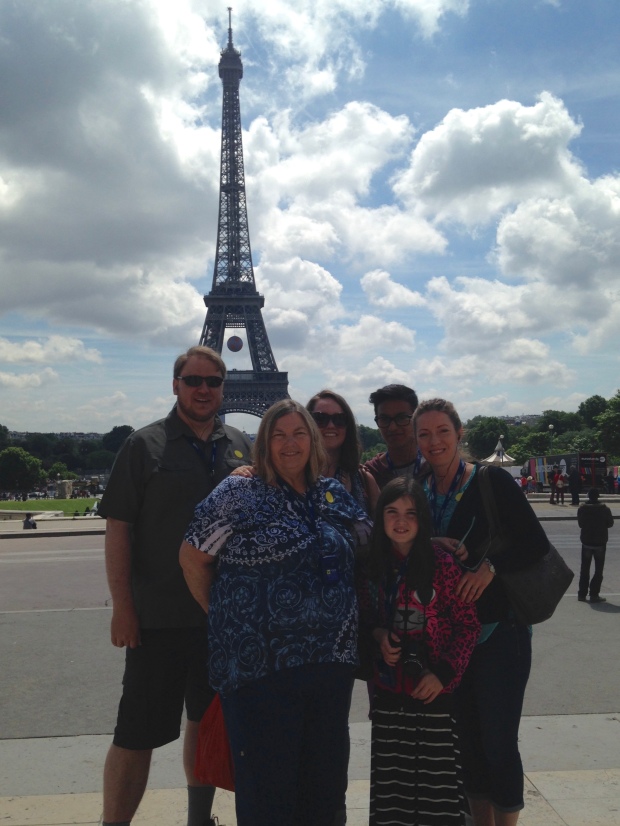 The six of us in front of la tour Eiffel

I feel I need to have a disclaimer here that I had very low expectations mostly based on stereotypes…it’s dirty, people are rude, it’s too crowded…but I had been given one small piece of advice, and that piece of advice may have completely altered my whole experience.

Every time you walk in a store or restaurant, wether you think people can hear you or are paying attention or not…just say bonjour…that’s the advice I received from friends a few days before we headed to Paris.

I said bonjour to every person I encountered. Every store and restaurant we walked into, every counter I walked up to, every bus I got on…I said bonjour. And, you know what happened…I found Parisians to be some of the kindest and most friendly people…it didn’t get rid of the crowds or the trash but did I mention that Paris is a BIG city…I think that’s just part of big city life…

People were eager to help us speak French, helpful and patient with us when we didn’t understand. People were kind to us on the Metro, offering up their seats to weary travelers. When I was walking around looking lost, people stopped to ask if I was ok and if they could help. There was so much life in Paris…all those people sitting in parks talking and laughing and drinking…I was only there for a few days, so I am not any sort of expert on Paris or the people of that incredible city, but it seemed to me a wonderful place.

This was one of my favorite things…sitting around ponds talking and laughing and watching ducks!

My experience there has had me thinking a lot about kindness. About how I engage strangers, and how I interact with the people I encounter in my daily life.

Do I say hello?

When I walk into a coffee shop is my first priority greeting the people there…both employees and customers…or do I walk in and say my order. I don’t think I am rude by any means…I don’t walk in and bark orders…and I’m very polite within what this culture says is acceptable…honestly people may find it very weird for someone to walk into a coffee shop and say hello to the room…but what if I took this advice and applied it to life here?

Would life change around me if I started saying hello? And not just when the cashier says it to me first, but initiated it, made eye contact, allowed it to lead into conversation…meant it the way I mean it when I see a friend.

Would I find just as much kindness and life here if I engaged people around me with this simple gesture? Because I think it’s more than just a gesture, more than just politeness. I think it shows a bit of humility, it demonstrates respect for the other person, an acknowledgment that life is about more than just me. And, maybe, in our culture of me, the simple act of saying hello is the kind of thing that Christ meant when he called us to be salt, to be light, to be in the world but not of it.

Oh, there was another piece of advice…to say au revoir…until next time my friend.

Hi, I'm Katie Dizon. And this space is where you’ll read about my adventures, my dreams, the stuff of daily life, and the crazy things me and mine step into every day. I am starting my own business, getting our son ready for high school, and preparing our home for when we get to adopt the next kiddos. The Dizon life is definitely never dull!